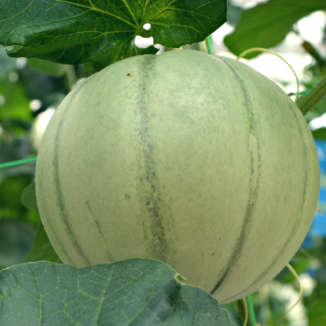 Cucumis melo (melon) is a eudicot diploid plant species (2n=2x=24) of interest for its specific biological properties and for its economic importance. It belongs to the Cucurbitaceae family, which also includes cucumber, watermelon and squash. Although originally thought to originate in Africa, recent data suggest that melon and cucumber may be of Asian origin. Melon is an attractive model for studying fruit ripening, sex determination and phloem physiology. It is also an important fruit crop, particularly in Mediterranean and East Asian countries, where hybrid varieties have a significant and growing economic value. This is a project of the Centre for Research in Agricultural Genomics CSIC-IRTA-UAB-UB.

Genomic DNA was extracted from the double-haploid line DHL92, the same line sequenced to obtain the previous version of the genome. A total of 2.5M PacBio long reads were generated, which corresponds to 50x coverage of the estimated genome, and using the hierarchical genome-assembly process 4 (HGAP4) pipeline. The resulting contigs were ordered and oriented based on the previous assembly (v3.6.1) with RaGOO to produce pseudomolecules. The new consensus sequences were polished with 20x Illumina paired-end reads (2x150 bp) and error corrected with the Pilon pipeline. The completeness of the final assembly was evaluated with BUSCO yielding 94.8% of complete and 1.7% of fragmented BUSCOs at the genome level.