Using the Gene Trees, we can infer the following pairwise relationships. 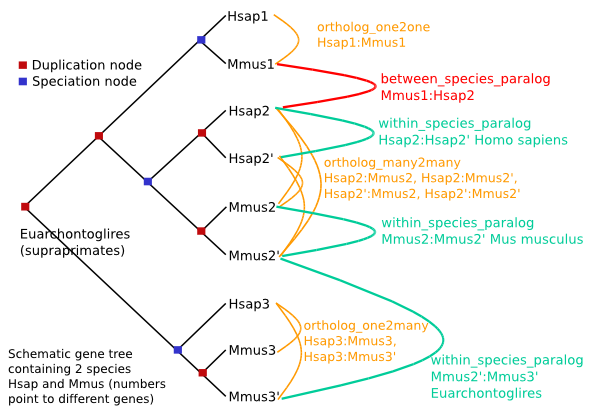 Homologues which diverged by a speciation event. There are four types of orthologues:

Genes in different species and related by a speciation event are defined as orthologues. Depending on the number of genes found in each species, we differentiate among 1:1, 1:many and many:many relationships. Please, refer to the figure where there are examples of the three kinds.

Homologues which diverged by a speciation event but end up in the same genome through hybridisation (e.g. polyploid plant genomes). They can have the same types as orthologues (see above), but importantly, the types refer to the number of genes in the sub-genomes.

Let's take wheat (Triticum aestivum) as an example. It is an hybrid of three sub-genomes named A, B, and D. If a gene is found in one copy in every sub-genome, the three A-B, A-D, and B-D homoeologues are all labelled as 1:1 homoeologues. If the gene has a second copy in the sub-genome D, the A-B pair is labelled as 1:1, while the A-D and B-D pairs are labelled as 1:many.

Orthologues against a polyploid genome are labelled considering the number of genes in the sub-genomes. For example, when comparing the hexaploid wheat Triticum aestivum against barley Hordeum vulgare, a gene that is in one copy in every sub-genome and in barley will have three 1:1 orthology pairs between wheat and barley. If there are two copies in barley, there will be 3×2=6 1:many orthology pairs. If wheat's A sub-genome also has two copies of the gene, its orthology pairs with barley would be many:many, whereas the orthology pairs involving the B and D sub-genomes would still be 1:many.

Homologues which diverged by a duplication event. There are two types of paralogues:

We compute a duplication confidence score for each duplication node. This is the Jaccard index of the sets of species under the two sub-trees. The score is sometimes refered as "species intersection score". 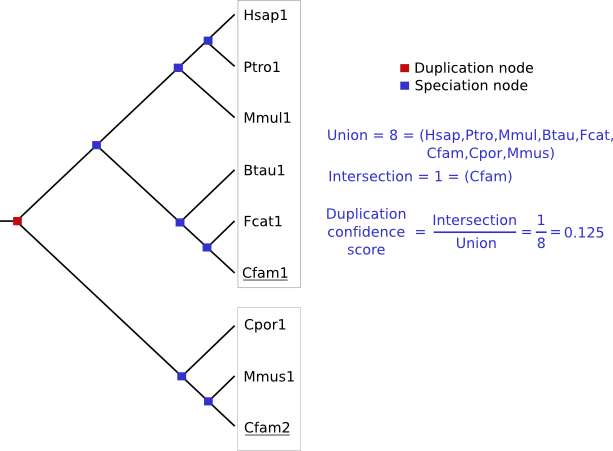 Such cases can be the results of real duplications followed by gene losses (as shown in the picture below), but most of the times occur as the result of a wrong gene tree topology with a spurious duplication node. Often assembly errors are behind these problems. It is not clear whether these genes are real orthologues or not, but they are the best available candidates (given the data), and we bend the definition of orthology to tag them as orthologues. They are flagged as "non-compliant with the gene tree". People interested in phylogenetic analysis mixing the orthologies and the trees should probably use the set of tree-compliant orthologies. 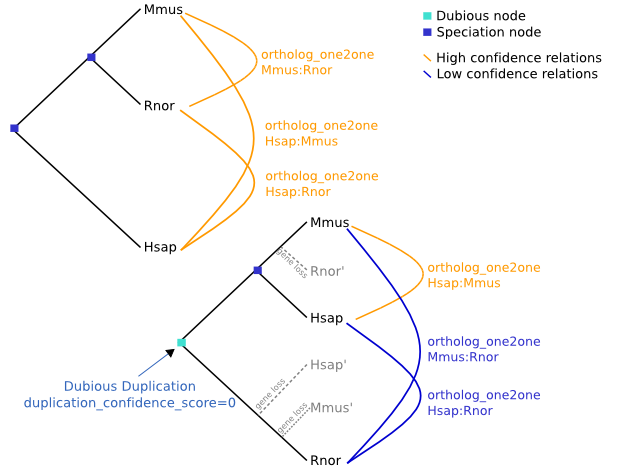 A paralogue labelled as a gene_split occurs when a gene appears to be broken in two. In the gene tree building process they will each align to one end of the other orthologues of the gene, so will be clustered and placed in the tree alongside the other homologues. They are commonly related to fragmented genome assemblies or a gene prediction that is poor in supporting evidence, resulting in two fragmented genes where there should be one large one.

Right after building the multiple alignment, we detect pairs pairs of genes that lie close to each other (< 1 MB) in the same sequence region and the same strand (see GeneA1/GeneA2 below). They are forced to be paired in the gene trees under gene_split events, and represent our most confident set. When there is no (or little) overlap between the gene fragments in the same species and they lie in different sequence regions in the assembly (see GeneB1/GeneB2 in the image below), we let TreeBeST5 decide their best position in the tree. They are linked by duplication nodes, and have a lower confidence index.

We carry a number of extra analyses to assess the quality of the orthology prediction, following external sources of evidence (local synteny, and whole-genome alignments). From there we are able to flag some orthologies as high-confidence.